The American Revolution and the Rise of Thayendanegea (Joseph Brant)

With the outbreak of the American Revolution in 1775, Thayendanegea better known to Canadians as Joseph Brant, was one of the Kanyen'kehà:ka (Mohawk) leaders and he remained loyal to the British Crown. The Mohawk were one of Britain's biggest allies' during the American Revolution. Brant's sister Konwatsi’tsiaienni, is also known as Mary (Molly) Brant was the common-law wife of Sir William Johnson.

After Johnson's death in 1774, the Brant's were caught up in an internal dispute within the Iroquois League which resulted in 2,000 Haudenosaunee losing their territory in upstate New York and migrating with the British Empire Loyalists to Upper Canada.

In the fall of 1784, following the American Revolution, Joseph Brant led the Mohawk Loyalists and other Loyalist Indigenous peoples to a large tract of land on the Grand River in what is today SW Ontario. The primary settlement was originally known as Brant's Ford, today is known as Brantford. This land was granted to them under the ​Haldimand Proclamation. 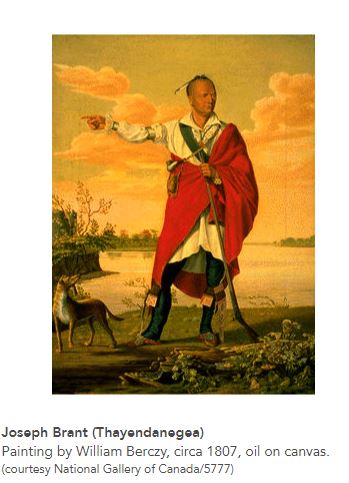 Brant fought with an Indigenous-Loyalist band during the war. He proved himself to be a good soldier and the British gave him a captain's commission. Brant's military prowess inspired such confidence that non-Indigenous fighters sometimes requested a transfer to join him. After the American Revolution ended in 1783, he fought for Indigenous land rights as a Mohawk and Six Nations leader. Ultimately in spite of all, he had done for the British, including forming the Western Confederacy, a united group of Haudenosaunee (Iroquois) and western Indigenous peoples, intent on blocking further American expansion westward, failed because of a lack of support from the British.

The strategic resettlement of the Mohawk in South Western Ontario and in Quebec provided great benefit to the British during the War of 1812.