The War in Ukraine

This guide will help you understand the crisis.

See his analysis under tabs -

Professor Hisdal has served for 25 years as first an infantry platoon commander, and later a tank troop leader in the Canadian Armed Forces.

Lieutenant Hisdal first served in the infantry during the Cold War from 1972 to 1979 where he participated in NATO exercises at the battalion and brigade level practicing to fight the armed forces of the Soviet Union in Europe and the Arctic.

Howard’s second tour of service was from 1996 to 2014 when he learned to be a tank troop leader and trained to fight a peer level opponent in the form of the Russian army.

In 2008, Captain Hisdal commanded tank and anti-tank missile forces that fought outnumbered in a computer simulation in the Tactics Room of the Combat Arms Training Centre in CFB Gagetown against Russia forces and won.  Professor Hisdal has designed and taught the popular History 230 Warfare and Terrorism since 1945 course at Okanagan College.  The CD behind Professor Hisdal’s name stands for Canadian Forces Decoration, given for long and honorable service.

On 25 February 2022, a day after Putin’s invasion of Ukraine, Howard was interviewed on Kelowna 10 and predicted a Russian defeat and the end of Putin.  Howard also took part in the Okanagan College panel on the Ukraine on 8 March 2022.  He stands by his prediction of an eventual Ukrainian victory. 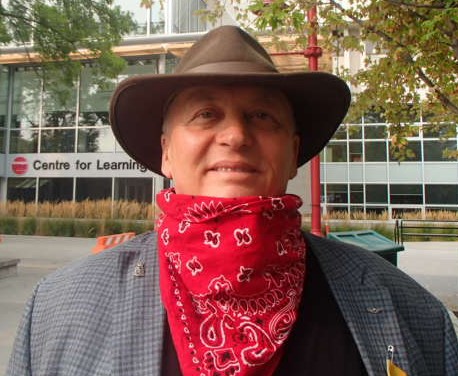 Professor Hisdal giving the "thumbs up" sign in 2004 on exercise in Yakima Maneuver area in Washington State. He was in command of a troop of 4 Cougar armoured vehicles with 76mm guns capable of firing 5 kilometres. Professor Hisdal commanding a mixed group of Canadian and American soldiers in 2012 in the Orchard Maneuver Area in Idaho.  Everyone is wearing body armour because they were supposed to film a live fire attack that was cancelled due to a storm.