This guide provides resources related to the interdisciplinary field of Indigenous Studies.

Indigenous women are often associated with or talked about in relation to trauma, violence, abuse, and discrimination. If you search Google using the keywords “Indigenous women” the top results are related to Missing and Murdered Indigenous Women. But this is not a complete vision of Indigenous women.

IMPORTANT: the dominant structure for organizing information is from a western perspective, for this reason you may need to use outdated (sometimes offensive) terminology to find resources related to Indigenous peoples; please contact us if you'd like assistance navigating this.

Subject headings are a tool designed to help researchers find similar materials. These are only some examples of the many subject headings that Okanagan College Library uses. Spend a few minutes exploring them when you find a book in the catalogue that supports your research.

Below is an example of where to find subject areas that are part of an item's record. You can click on them to find other materials with the same subject heading. 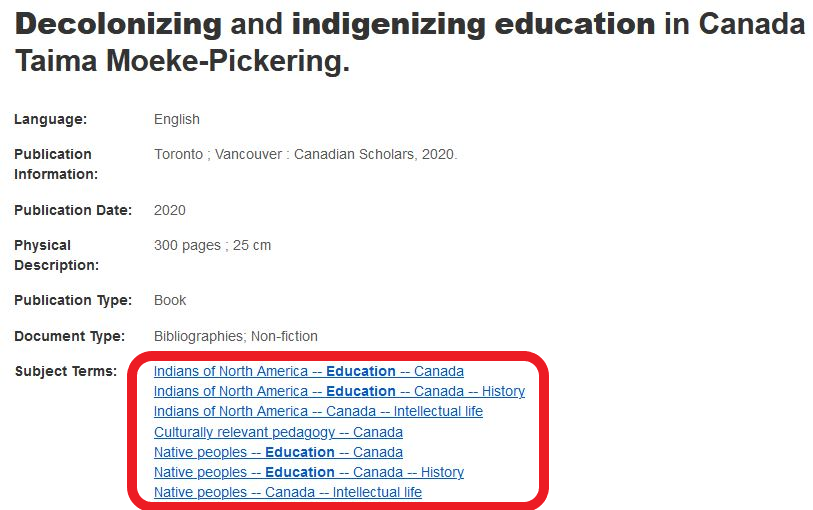 Indigenous Women and the Indian Act

Autumn Peltier is an Ojibwe water protector. "What I've been told through ceremonies is Mother Earth has been surviving for millions of years without us and it has taken us less than a century to destroy her. And Mother Earth doesn't need us but we need her." [The National, 2018, linked below]

Siila Watt-Cloutier is an Inuit environmental and human rights advocate. “My focus now is to continue to humanize climate change. It’s understanding pieces from a human scale and our history and the consequences of our actions that will help us see that trauma, both human and the planet’s, are one in the same… we are one family.” [Women of Influence, 2022, linked below]

Christi Belcourt is a Métis visual artist and activist. She organized a collaborative and commemorative project, Walking With Our Sisters, which displays beaded vamps which represent missing and murdered Indigenous women. "The whole thing is ceremony. And that's what's required in order to properly acknowledge and honour the women's lives." [Muskrat Magazine, 2014]